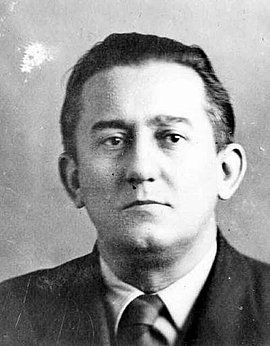 Franz Dahlem was born into a working-class Catholic family from Lorraine, and worked as a clerk in Saarbrücken. He joined the Social Democratic Party (SPD) in 1913 and served as a soldier in the First World War, although he was opposed to the war. In 1917 he left the SPD and joined the Independent Social Democratic Party (USPD); from 1919 on he was a member of the USPD Central Committee. In 1920 he joined the German Communist Party (KPD) and became a member of its leadership. In 1929 he became a member of the KPD’s politburo and represented the party in the Prussian State Parliament between 1920 and 1924, and in the Reichstag from 1928 on. Wanted by the police after the National Socialists took power, Dahlem fled to France in 1933, where he was a member of the KPD’s leadership in exile. He took part in the discussions with social democrats, socialists and other opponents of National Socialism about building a “German Popular Front”. In the Spanish Civil War he was chief of the Political Commission of the International Brigades. After he returned to France, in 1939 Dahlem was interned by the French authorities in various places including Vernet camp. In 1942 the Vichy police handed him over to the Gestapo. Following eight months in custody in the Gestapo headquarters in Prinz-Albrecht-Straße in Berlin, he was imprisoned until 1945 in Mauthausen concentration camp, where he was a member of the International Camp Committee. Dahlem survived the war. In 1953 he was removed from his senior posts in the East German Communist Party (SED) as a “West emigrant”, but was politically rehabilitated in 1956. Franz Dahlem died in Berlin in 1981.