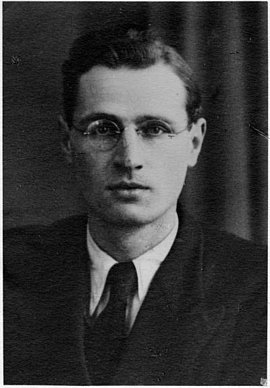 Born in Heidelberg in 1913, Ferdinand Thomas joined communist organizations while still at school. He was sentenced to three years’ imprisonment in a penitentiary for his resistance activities in 1936. Through Fritz Bernt, he came into contact with Adolf Reichwein, making contacts on his behalf to Franz Jacob and Anton Saefkow through Fritz Emrich and Judith Auer. After Judith Auer had tested Thomas’ trustworthiness in conversations with Magnus Poser in Thuringia, a meeting was arranged between Social Democrats and Communists in Rudolf Schmid’s surgical practice at 76 Köpenicker Strasse in Berlin on June 22, 1944. Along with Saefkow and Jacob on behalf of the Communists, a Gestapo informer codenamed “Hermann” was also present. This informer had already played a key role in the arrest of Bernhard Bästlein in May 1944. The exploratory talks between Leber, Reichwein, Saefkow, and Jacob on the evening of June 22 led to initial rapprochements between Social Democrats and Communists’ positions. The talks were to be continued on July 4, 1944, to go into more detail on certain points; an underground station was chosen as the meeting place. However, the Gestapo arrested Saefkow, Jacob, and Reichwein immediately after the meeting on July 4, and Julius Leber the next morning. Saefkow, Jacob, and Bästlein received death sentences on September 5, 1944, Reichwein and Leber on October 20, 1944. Ferdinand Thomas was also arrested on July 19, 1944, sentenced to death on October 4, 1944, and murdered in Brandenburg-Görden on November 20, 1944.