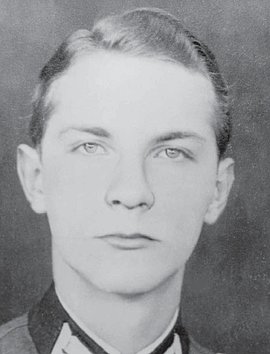 The infantry second lieutenant Ewald Heinrich von Kleist was the oldest of six children born to Ewald von Kleist-Schmenzin and his first wife Anna, née von der Osten. Kleist was won over for the resistance against Hitler by Stauffenberg. The latter approached Kleist in February 1944, after Axel von dem Bussche had been severely injured on the Eastern Front in January 1944 and was no longer available as an assassin. Like Freiherr von dem Bussche before him, Kleist was to blow himself up along with Hitler during a uniform presentation. Kleist requested a day to think it over and asked his father’s advice. His father advised him to take on the fatal task: “You must do it. Anyone who failed in such a moment would never enjoy life again.” The plan did fail, however, because Hitler kept postponing the presentation appointment. On July 20, 1944, Kleist was one of the numerous helpers for the attempted coup in the Bendler Block in Berlin. After the attempt failed, Kleist managed to conceal his activities in the resistance. Proceedings against him were closed in December 1944 due to lack of evidence. He thus evaded trial before the “People’s Court” and was deployed on the front until the end of the war.