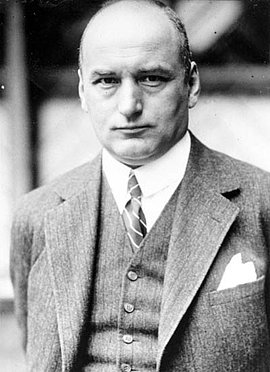 A native of Düsseldorf, Erich Klausener followed in his father's footsteps and began a career in public administration. Initially a junior executive officer in the Prussian Ministry of Trade, he served in the First World War in 1917, after which he was appointed county commissioner in the Eifel region and later in Recklinghausen. From 1924 on, he served as a director in the Prussian Ministry of Social Services. In 1926 he headed the police division in the Prussian Ministry of the Interior. When Göring took over the office of minister-president in 1933, he transfered the Catholic senior official to the unimportant Reich Ministry of Transportation. From 1928 on, Klausener was chairman of the group Katholische Aktion (Catholic Action) in Berlin, and spoke as its representative at the Catholic congress in Berlin's Hoppegarten in June 1934. There, he concluded his speech by openly criticizing the National Socialists for ostracizing their ideological opponents. A short time later, Erich Klausener was shot and killed in cold blood by the SS in his office during the murders of June 30, 1934.