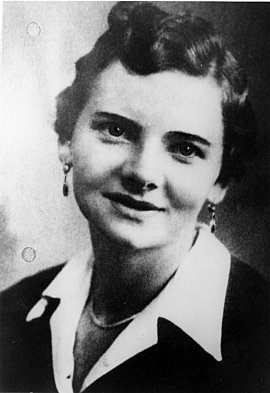 Elli Garius grew up in a working-class family in Berlin. Her first job was as a domestic servant and she then became a factory worker. She joined the “Fichte” workers’ sports association as a teenager. In 1930 she married Max Giese; the couple had one daughter. Following their divorce in 1934, she met the communist Fritz Voigt, who was arrested in 1935 and sentenced to three years in a penal institution. He was then taken to Sachsenhausen concentration camp. After his release in 1941, the couple moved to Schönow in Brandenburg and their daughter was born in 1943. Elli Voigt was involved in illegal political work by her husband, who was drafted into one of the 999th Division’s “probation units” in June 1943. She worked in the Schönow cable factory and was in contact with members of the resistance group around Franz Saefkow from the fall of 1943. She was also able to forge links to groups in Bernau and Zepernik. Voigt printed and distributed flyers, obtained forged papers for victims of persecution, and supported forced laborers, who were housed in barrack camps in Schönow and the surrounding area, and whom she involved in her illegal work. Her mother Elvine Garius helped her with these activities. Elli Voigt was arrested on June 13, 1944, and sentenced to death by the “People’s Court” on October 21, 1944. She was murdered in Berlin-Plötzensee on December 8, 1944.