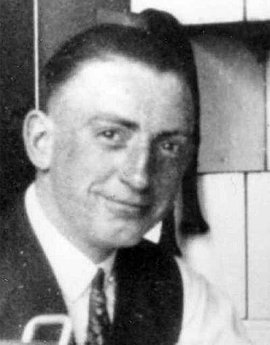 Born into a shoemaker’s family in Neumünster as the youngest of seven children, Eduard Müller grew up in impoverished circumstances. After leaving school he initially learned the trade of joiner and became a member of the Catholic youth movement. Since he felt called to the priesthood and was particularly gifted, members of Neumünster Parish assisted him to attend high school and then to study theology. Eduard Müller was ordained as a priest in Osnabrück in 1939 and appointed as a minister for young people at the Church of the Sacred Heart of Jesus in Lübeck, where he was very popular because of his sympathetic character. Although Church federation work with young people was banned, he took care of youth groups and led a discussion circle for young journeymen whose topics included National Socialism, daily political events and the military situation. In these discussions Müller used information from British radio stations and leaflets including copies of the sermons of Bishop Clemens August Graf von Galen, which he listened to and duplicated with the prelate Hermann Lange and the chaplain Johannes Prassek. The three Catholic ministers had contact to the Protestant pastor Karl Friedrich Stellbrink. Eduard Müller was arrested after a denunciation. He was sentenced to death by the People’s Court on June 23, 1943 in the “Lübeck Christians’ Trial” and murdered on November 10, 1943 in Hamburg.