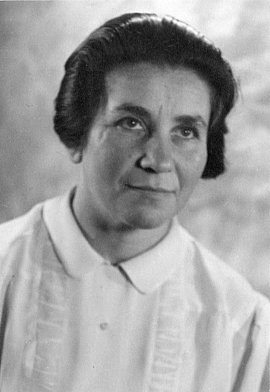 Born in Königsberg, the nurse Edith Fürst was influenced by the Jewish youth movement. After the National Socialists took power in 1933, she and her sister Rosa Adler set up a private children’s home in Berlin-Niederschönhausen. It was renowned for its free spirit and many parents who were opposed to the Nazis had their children looked after there. Edith Fürst had to close the home in 1938. From the fall of 1939, she ran the Jewish Community’s kindergarten on Auguststraße in Berlin. In 1941, Edith Fürst married Emanuel Bruck, a former editor of the Rote Fahne newspaper, who perished as a political prisoner in Dachau concentration camp in 1942. Edith Bruck went into hiding when she was to be deported on October 23, 1942. The dentist Kurt Hess, who worked illegally in a communist resistance group, played a key role in helping her. Kurt Hess and Edith Bruck had known each other for many years. He obtained a postal identity card in the name of his sister-in-law Gertrud Hess, complete with a photo and stamp. Bruck was also helped by Pastor Harald Poelchau, who put her in contact with his friends, the archaeologist Peter Knoblauch and his wife Yvonne in Berlin-Grunewald. As Peter Knoblauch was drafted as a soldier and his wife left Berlin with their young daughter, Edith Bruck was able to look after their house under her false name from the summer of 1944. She was arrested in the house on November 19, 1944, and consigned to Ravensbrück concentration camp, but survived the end of the war.