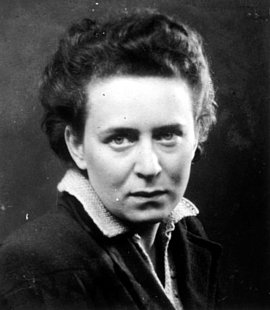 After completing commercial school, Dora Davidsohn worked in an office. She emigrated in 1933 to Amsterdam, where she came into contact with the Communist Party via her later husband Alfred Benjamin. She followed him into exile in France in the fall of 1934. On the outbreak of war, Dora Davidsohn was living in Paris with no valid identity papers, and was put into La Petite Roquette prison when she attempted to register with the French authorities. From there, she was transferred to the Rieucros internment camp in October 1939, and then to Brens camp. She married Alfred Benjamin while under internment. After escaping from Brens in July 1942, she made contact with the Communist Party in Lyon, and joined the Résistance. Alfred Benjamin escaped from Chanac labor camp in August 1942, but died in an accident while attempting to enter Switzerland. Disguised as a French woman under the name of Renée Fabre, Dora Benjamin worked at German official offices to gather important information for the Résistance. She also used her contacts to German soldiers to distribute leaflets and flyers against National Socialism. Dora Benjamin, whose parents and sisters were deported in 1942 and murdered in Lublin-Majdanek extermination camp, survived the end of the war in France. She returned to Germany in 1946. A few years later, she married Hans Schaul, who had been taken to Djelfa/Algeria in 1941 after his internment in Le Vernet.