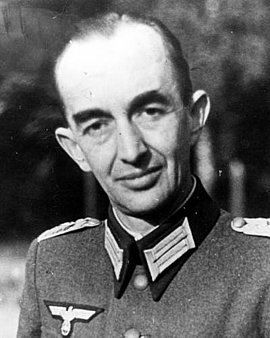 Busso Thoma fought in the First World War and retired from military service as a lieutenant in 1920. He was recommissioned in 1939 and worked on the staff of the General Army Office as an Air Force consultant. In 1941 he met Hermann Kaiser, who was responsible at that time for keeping the war diary of the Army High Command. Kaiser supported the conspirators’ plans for a coup. Thoma’s discussions with Kaiser led him to join the resistance and he became an accomplice to the plans to assassinate Hitler. On July 20, 1944 Thoma was in the Bendler Block in Berlin and joined the conspirators in trying to hold out against forces from the Reich Security Main Office who had been sent to occupy the building. Thoma was arrested the same day, but released shortly afterwards. The Gestapo arrested him again on September 14, 1944. Busso Thoma was sentenced to death by the People’s Court on January 17, 1945 and murdered some days later in Berlin-Plötzensee.