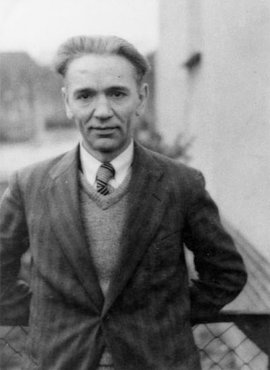 Born in 1894, Bernhard Bästlein grew up in a working-class family of Social Democrats in Hamburg and became a precision mechanic. He joined the metal workers’ association and the SPD in 1912. After returning from World War I, Bästlein was elected onto a soldiers’ council and was an active supporter of the USPD. He joined the KPD along with his wife Johanna in 1920, emigrating to the Soviet Union after taking part in the communist “March Action” in Hamburg in 1921, then in 1923 returned to Germany, where he was an editor of various communist newspapers until 1931. Made political head of the KPD’s central Rhine region in 1931, Bästlein was elected to the Prussian state parliament in 1932 and won a seat in the Reichstag in the election of March 1933. He was arrested shortly later, in May 1933, and sentenced to imprisonment in a penitentiary. After serving this term, he was sent to Esterwegen concentration camp in 1936. After his release from Sachsenhausen concentration camp in 1940, he found work as a precision mechanic and renewed his contacts with like-minded friends, with whom he set up a resistance group. A core leadership was formed in winter 1941, consisting of Oskar Reincke, Franz Jacob, and Bernhard Bästlein. Bästlein was arrested at work in October 1942. He was shot as he attempted to escape, then taken to Fuhlsbüttel prison and severely tortured. He was moved to Berlin in summer 1943. Bästlein managed to escape from Plötzensee prison when it was damaged in an air raid on January 30, 1944. He made contact with the communist resistance organization around Franz Jacob and Anton Saefkow, becoming a member of its leadership in May 1944. Arrested once again on May 30, 1944, Bernhard Bästlein was sentenced to death on September 5 and murdered in Brandenburg-Görden on September 18, 1944.