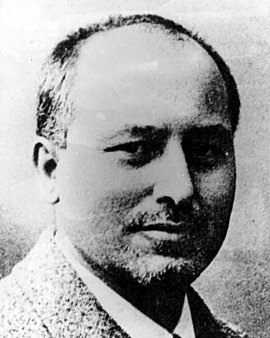 August Frölich learns the trade of iron lathe operator and becomes head of the German Metalworkers’ Federation in Altenburg/Thuringia before the First World War. After 1918 he is elected to the Thuringian State Parliament for the Majority Social Democrats and is minister of state and minister president in Thuringia from 1920 to 1924. From 1924 on he is an SPD member of the Reichstag and is temporarily taken into “Schutzhaft” (“protective custody”) in 1933. The conspirators for the coup attempt of July 20, 1944 designate August Fröhlich as political subcommissioner in military district IX (Kassel). After the unsuccessful assassination attempt on Hitler he is arrested by the Gestapo, but survives the war. After 1945 he is president of the Thuringian State Parliament until the administrations of the Länder in the GDR are dissolved in 1952.