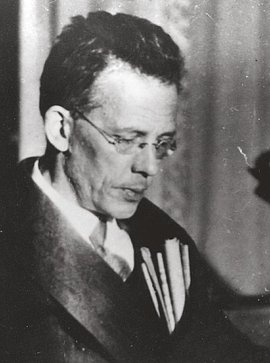 Alexander Schwab studied at various German universities and was a leader in the Free German Youth organization. He went to fight in the First World War in 1914 as a volunteer and returned as a pacifist. In 1918 he joined the Spartacus League and was a co-founder of the German Communist Workers’ Party (KAPD), which he left in 1922. Schwab was a journalist and writer, and worked as head of the press department at the Reich Institute for Labor Placement and Unemployment Insurance in Berlin from 1922 until his dismissal in 1933. In May 1933 he was imprisoned for six months. In 1934 Schwab and Franz Jung set up a business press agency for banks, newspapers, and specialist journals. Schwab was active in the Reich leadership of the “Rote Kämpfer” (Red Fighters), wrote circulars, and reorganized individual groups. Schwab was arrested again in November 1936. In the trial before the People’s Court he claimed the entire responsibility for the illegal political work. At the end of November 1937 Schwab was sentenced to eight years in a penitentiary, which he served in Brandenburg, Sonnenburg, and the Emsland camps. He died in Zwickau Penitentiary on November 12, 1943.