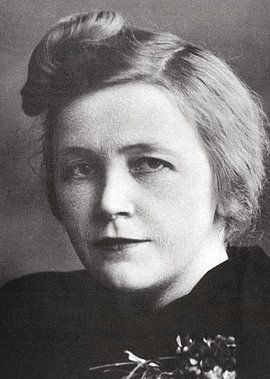 Elfriede Remark grew up in Osnabrück. Her brother was Erich Maria Remarque, the author of the well-known anti-war novel All Quiet on the Western Front. After training as a dressmaker, she ran her own salon, at first in Leipzig and later in Dresden. In 1941 she married Erich Scholz. Elfriede Scholz made no secret of her critical stance toward National Socialism and war. She told an acquaintance and customer at her tailoring shop that she did not believe in the propaganda of a German “final victory” and that the German soldiers on the front were nothing but “beasts for the slaughter.” She also said she would kill Adolf Hitler to put an end to the war. She made similar statements to her landlady. In the late summer of 1943 Elfriede Scholz was denounced and indicted on the basis of these two women’s evidence. The “People’s Court” under Roland Freisler sentenced her to death for “subverting the war effort” and “aiding the enemy” on October 29, 1943. All pleas for clemency were rejected. A first execution date was cancelled unexpectedly shortly beforehand, after all preparations had been made and Elfriede Scholz had been taken to Berlin-Plötzensee prison. She waited there for over a week, uncertain of the new execution date, until she was taken back to the women’s prison on Barnimstraße. Elfriede Scholz was murdered in Berlin-Plötzensee on December 16, 1943.