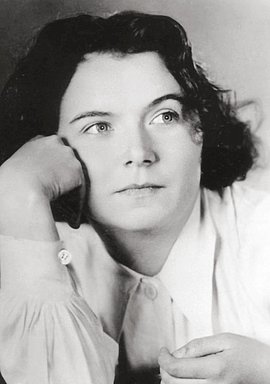 Born in Hamburg in 1919, Traute Lafrenz was a member of the class taught by Erna Stahl at Lichtwark High School, along with Heinz Kucharski and Margaretha Rothe. Even after 1933, Stahl continued to teach in the liberal tradition of the school with its emphasis on the fine arts. In the summer of 1939, Traute Lafrenz met Alexander Schmorell in Hamburg, where he was spending a semester at the university. In May 1941 she went to Munich, where she soon met Hans Scholl and Christoph Probst. She took part in many of the White Rose group’s conversations and discussions, including with Kurt Huber. In November 1942, Traute Lafrenz brought the third White Rose leaflet to Hamburg. That Christmas, she tried to get hold of a duplicating machine in Vienna. Along with Sophie Scholl, Traute Lafrenz obtained paper and envelopes for dispatching more leaflets in January 1943. She was first interrogated by the Gestapo on March 5, 1943, then arrested a few days later on March 15. Traute Lafrenz was indicted on April 19, 1943 along with Alexander Schmorell and Kurt Huber, and sentenced to one year in prison. After her release, the Gestapo arrested her again at the end of March 1944 and put her into Fuhlsbüttel Gestapo prison in Hamburg. Along with other women prisoners from the Hamburg White Rose group, Traute Lafrenz was transferred via prisons in Cottbus and Leipzig to Bayreuth, where she was liberated by American troops on April 15, 1945.