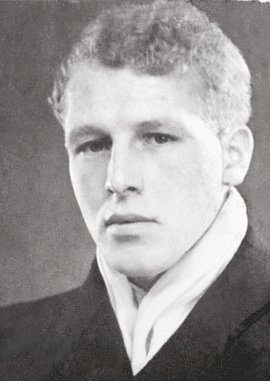 Born in Hamburg in 1919, Karl Ludwig Schneider completed his schooling in 1938 at the Lichtwark High School and was then called up for labor and military service, where he met Hans Leipelt in mid-1940. From the winter of 1941 on, Schneider studied German and English literature and journalism in Hamburg. He had close contacts to Leipelt’s circle of friends. In the late fall of 1942 he obtained a copy of the third White Rose leaflet. Like Heinz Kucharski, Reinhold Meyer, Margaretha Rothe, and Albert Suhr, Karl Ludwig Schneider attended Wilhelm Flitner’s lectures on education. Schneider and his friends were determined to try to reject the National Socialists’ claim to authority over belief and ideology in open debate, and to forge links with liberal traditions. Discharged from the Wehrmacht after a serious illness, Karl Ludwig Schneider was arrested in Freiburg in November 1943, shortly after he began studying. He was taken to Fuhlsbüttel Gestapo prison, then to Neuengamme concentration camp, and later to Stendal regional court prison. Karl Ludwig Schneider was released from prison on April 12, 1945 as the US troops closed in.