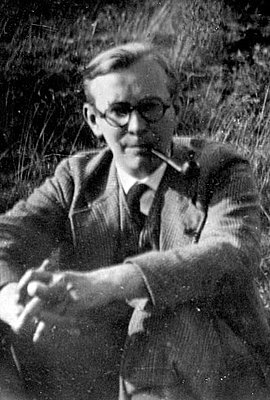 Arvid Harnack grew up in an academic family and after gaining an emergency wartime school-leaving certificate joined a volunteer corps in 1919. A Rockefeller grant enabled the law scholar to study in Madison/Wisconsin from 1926 to 1928. There he met his future wife Mildred. In 1931 Harnack obtained his doctorate in Gießen with a thesis on the pre-Marxist workers movement in the USA. A co-founder of the Society for the Study of the Soviet Russian Planned Economy (ARPLAN), he visited the Soviet Union in the summer of 1932 with a delegation from the society. After 1933 Harnack began forming a study circle, initially with young workers and later with the writer Adam Kuckhoff, his wife Greta, occasionally the religious socialist and former Prussian Minister of Culture, Adolf Grimme, the entrepreneur Leo Skrzypczynski and others. Harnack wanted to enable the participants to analyze the political and economic context of National Socialism, and to prepare them for the time after the fall of the regime. He extended his contacts to government personnel critical of the National Socialist regime. In talks with representatives from the American and Soviet embassies Harnack gave assessments of the political and economic situation in Germany. From 1935 on he worked in the America Department of the Ministry of Economics, in 1937 he joined the NSDAP and in 1942 he was promoted to the post of senior executive officer. From 1940 on Harnack cooperated with Harro Schulze-Boysen, whom he had met in 1935. At the beginning of 1941 they informed a member of the Soviet Embassy about the preparations for the military attack on the Soviet Union. At the beginning of 1942 Harnack wrote the study “The National Socialist Stage of Monopoly Capital”, which circulated in resistance circles in Berlin and Hamburg. Harnack was arrested on September 7, 1942, sentenced to death by the Reich Court Martial on December 19 and murdered on Hitler’s orders on December 22, 1942 in Berlin-Plötzensee.