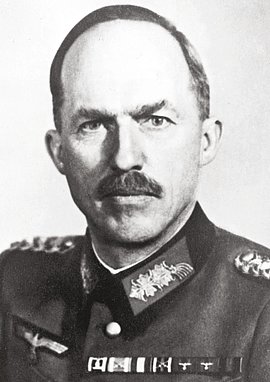 Paul von Hase was a career officer married to Margarethe Freiin von Funck, with whom he had two daughters and two sons. From the spring of 1933 on, he commanded a battalion in Neuruppin until he was transferred to the garrison at Landsberg on the Warthe river in February 1935. As a major general and commander of a regiment, he was soon aware of plans to overthrow Hitler in the spring of 1938. Wilhelm Canaris, Hans Oster, and the generals Erwin von Witzleben, Franz Halder, and Erich Hoepner were involved in the preparations for this abortive endeavor. After serving in the campaigns in Poland and France, Hase became ill in fall of 1940 and was no longer fit for active duty at the front. He was appointed commandant of the city of Berlin, a position that allowed him to intensify his contact with Ludwig Beck and members of the military opposition circles around Friedrich Olbricht. As city commandant, Paul von Hase figured prominently in the planning of Operation "Valkyrie." On July 20, 1944, he issued orders to seal off the government quarter. Paul von Hase was arrested in the evening of July 20 after the coup failed. On August 8, 1944, he was sentenced to death by the People's Court in the first trial of the conspirators and murdered the same day in Berlin-Plötzensee.