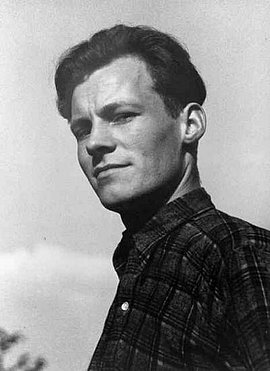 Born in Lübeck, Herbert Frahm joined the Young Socialist Workers (SAJ) as a teenager in 1929. In 1930 he became a member of the Social Democratic Party (SPD), but left to join the Socialist Workers Party (SAP) in 1931. In March 1933 Frahm was a delegate at the illegal SAP conference in Dresden under the codename Willy Brandt. In April 1933 he was sent to Oslo to set up a foreign bureau for the SAP, and studied philosophy and history there from September 1934 on. As head of the SAP’s foreign bureau and the central foreign office of the German Young Socialists’ Federation (SJVD) he maintained links with groups in Berlin and northern Germany. From 1934 to 1938 Willy Brandt traveled frequently on a Norwegian visitor’s passport for informational purposes and as a courier, and worked as a press correspondent in Spain. As SJVD representative he supported the creation of a “Popular Front” against Hitler and attended the Paris conference of the Committee of the German Opposition in 1938. Expatriated from Germany in 1938, Brandt became a Norwegian citizen. On April 9, 1940 he fled Oslo in the face of the German invasion. Disguised as a Norwegian soldier, he was a German prisoner of war between May and June 1940. Afterwards he went under cover to Sweden, where he established the Swedish-Norwegian Press Bureau in 1941. Between 1942 and 1945 he was honorary secretary of the International Group of Democratic Socialists, Working Group for Peace Questions (known as the Little International), and had contact to resistance groups in Germany. After the war Brandt returned to Germany as a correspondent for Scandinavian newspapers. In 1947 he rejoined the SPD. Between 1957 and 1966 he was governing mayor of Berlin, from 1964 to 1987 SPD party chairman and from 1987 the party’s honorary chairman. From 1966 to 1969 Brandt was Federal German foreign minister; between 1969 and 1974 he was the fourth chancellor of the Federal Republic of Germany. From 1976 on he was chairman of the Socialist International. Willy Brandt received the Nobel Peace Prize in 1971. He died in 1992 in Unkel am Rhein.