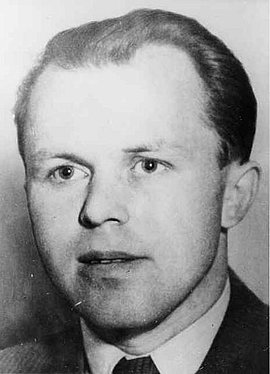 After serving his apprenticeship, Willi Gall worked initially as a lathe operator and then as a co-driver until 1932. In 1929 he joined the German Communist Party (KPD), worked in the local KPD group in Pethau near Zittau, and was elected to the local council in 1932. Gall emigrated to Czechoslovakia in April 1933, secured the link with Zittau as a courier and worked in Prague from 1934 to 1938. In 1938 Gall served as an instructor in the “Center” leadership department of the KPD. In 1938-39 he went to Berlin illegally several times from Czechoslovakia and Denmark. Taken by surprise in Berlin when the Germans invaded Poland in September 1939, Gall stayed in the city and organized clandestine work in the former KPD sub-district South. He produced a series of leaflets with groups from the south-eastern city districts of Alt-Glienicke, Bohnsdorf and Adlershof, as well as an edition of the newspaper “Berliner Volkszeitung” in November 1939. He had contact to various factories and companies, the German National Theater and a sports club, the “Neuköllner Sportfreunde”. Reports on the public mood were an integral part of Gall’s leaflets. In December 1939 Gall was arrested along with over 100 other opponents of the National Socialists from Adlershof, a district of Berlin. Willi Gall was sentenced to death by the People’s Court on January 23, 1941 and murdered on July 25, 1941 in Berlin-Plötzensee.