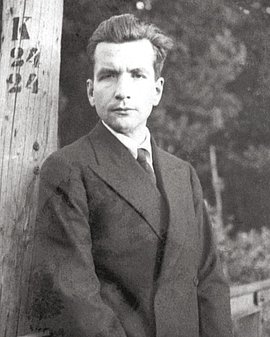 Werner Krauss, born in Stuttgart as the son of a literary historian, studied Romance literature, gained a PhD, and worked at the University of Marburg from 1931, becoming a lecturer in 1940. That same year, he was called up as an interpreter to Berlin. There, he came back into contact with John Rittmeister, whom he had known since 1926. Rittmeister had close links to Harro Schulze-Boysen and took part in the work of the Red Orchestra. Krauss was also a close friend of Ursula Goetze, another member of the resistance network. He supported their illegal activities on many occasions, for instance the fly-posting campaign of May 17/18, 1942, against the Nazi propaganda exhibition “The Soviet Paradise.” Werner Krauss was arrested on November 24, 1942, and sentenced to death on January 18, 1943. By providing several psychological assessments, he managed to have his trial repeated. He was sentenced to five years in a penal institution on September 14, 1944, and escaped from prison in the spring of 1945.