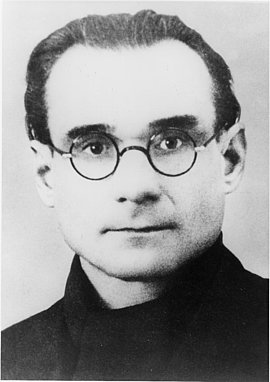 Born in Waldheim in 1897, Walter Küchenmeister was the son of a shoemaker and trained as a turner. He joined a labor union and the SPD at a young age and volunteered for the navy during World War I. After 1918 he joined the Communist Party of Germany and was an editor for the communist Ruhr-Echo newspaper in Essen until 1926, but was later expelled from the KPD. He made a name for himself as a biographer of Thomas Müntzer and Tilman Riemenschneider. In 1933/34 Walter Küchenmeister was imprisoned in Sonnenburg concentration camp, before being released as an invalid in the fall of 1934. Shortly later, he joined the circle formed around the Schumachers in the Red Orchestra resistance organization. He was a frequent participant in their meetings, wrote leaflets and flyers, used his foreign contacts, and distributed material. Walter Küchenmeister was arrested along with his partner Elfriede Paul on September 16, 1942, sentenced to death in February 1943, and murdered in Berlin-Plötzensee on May 13, 1943.