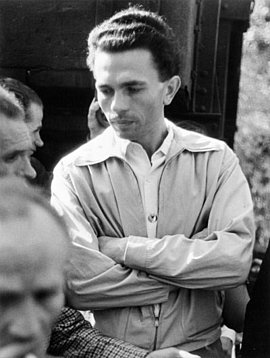 Born in 1914, the typesetter and KPD youth functionary Walter Janka was involved in illegal activities from 1933 on, as were his brothers. After his brother Albert was murdered by the SS, he was arrested in April 1933, imprisoned in Bautzen penitentiary and Sachsenburg concentration camp, and deported to Czechoslovakia in August 1935. At the end of 1936, Janka went to Spain, against the will of the KPD leadership in Prague. He joined the Thälmann Battalion in the Eleventh International Brigade. After some success at the front he was made an officer, taking over a company of the Spanish People’s Army and rising to the rank of battalion commander. Fighting in many battles up to the end of the Spanish Civil War, Janka was interned in France along with other German members of the International Brigades in February 1939. In the summer of 1941, under threat of extradition to Germany, Janka escaped from Les Milles camp and was soon able to emigrate to Mexico, with the aid of his later wife. In Mexico he helped set up the publishing house El libro libre and continued his political work in the Bewegung Freies Deutschland (Free Germany Movement) and the KPD in exile. He returned to Germany in 1947. As head of the Aufbau publishing house in East Berlin, he was arrested in 1956 and sentenced to five years in a penitentiary in a show trial in 1957, along with Wolfgang Harich and others, for allegedly forming a “counter-revolutionary group.” Janka found himself in Bautzen penitentiary for the second time, but was released in 1960 due to persistent international protests. The judgment was repealed in 1990, four years before Walter Janka’s death.