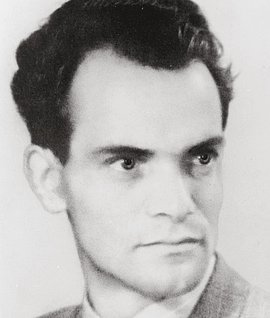 Walter Husemann grew up in a working-class family and joined the Communist Youth Federation of Germany in Berlin-Pankow in 1924. He was fired from his apprenticeship as a toolmaker when he organized a strike. He joined the KPD in 1928 and became the head of the Antifascist Young Guard in 1929. From 1930 to 1933 he worked as a trainee journalist and editor for communist newspapers in Berlin, Cologne, and Mannheim. After 1933, Husemann went into hiding and worked illegally, maintaining many contacts to the resistance in Berlin. At the end of November 1936, he and his father were arrested and put into Sachsenhausen concentration camp without trial, then he was transferred to Buchenwald concentration camp in 1937. After his release in September 1938, he worked as a toolmaker and came into contact with the resistance circle gathered around Harro Schulze-Boysen through his wife Marta. He also had links to John Sieg, Wilhelm Guddorf, and the group around Herbert Baum. Husemann recommended Hans Coppi for radio operator training to Kurt Schulze. Arrested at his workplace on September 19, 1942, he was sentenced to death by the Reich Court Martial on January 26, 1943, and murdered in Berlin-Plötzensee.