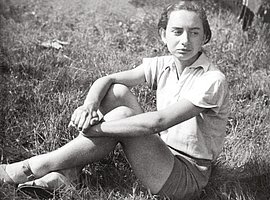 Born in Berlin, Ursula Goetze joined the Communist Youth Federation while still at school, and was briefly imprisoned for her membership in 1933. After attending commercial college, she worked as a shorthand typist from 1935 on and maintained close links to a circle of communists in Berlin-Neukölln, where she took part in helping victims of racial and political persecution. A decisive moment was meeting the actress Eva Knieper, with whom she attended evening classes and who married the neurologist John Rittmeister in 1939. Rittmeister was in close contact to Harro Schulze-Boysen and involved in the Red Orchestra’s resistance activities. Meetings were held at Goetze’s home, including with French forced laborers. In the night of May 17, 1942, she and her friend Werner Krauss fly-posted some 50 notes against the Nazi propaganda exhibition “The Soviet Paradise,” protected by Friedrich Rehmer. Ursula Goetze was arrested on October 15, 1942, sentenced to death on January 18, 1943, and murdered in Berlin-Plötzensee on August 5, 1943.