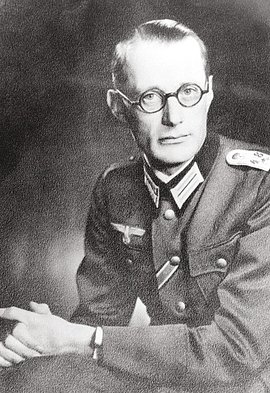 The agriculturalist Ulrich-Wilhelm Graf von Schwerin von Schwanenfeld was born in Copenhagen. He spent his formative years at Rossleben School, completing his schooling in 1921. He studied agriculture in Munich, Berlin, and Breslau. He witnessed the “Hitler putsch” in Munich in 1923, prompting him to reject National Socialism. A few months after completing his studies in 1926, he inherited the agricultural estates of Göhren in Mecklenburg-Strelitz and Sartowitz in then Polish West Prussia. He married Marianne Sahm in 1928, and the couple later had five sons. His active resistance activities began in 1938, in close collaboration with his friends Peter Graf Yorck von Wartenburg and Fritz-Dietlof Graf von der Schulenburg. He became an important link between the civilian and military opposition during the 1938 “Sudetenland crisis” due to his contacts to the Foreign Office and the Office for Foreign Affairs/Counterintelligence in the Armed Forces High Command. Called up as a reserve officer on the outbreak of war, he worked on the staff and in the direct personal vicinity of the later Field Marshal and Commander in Chief West Erwin von Witzleben from November 1939 on. He heard of mass shootings of Polish Christians and Jews in the gravel pit on his Polish estate of Sartowitz as early as 1939. After Witzleben’s transfer, he was posted from Paris to Utrecht in 1942 as “politically unreliable.” In March 1943, Hans Oster had him transferred to Berlin, where he was involved in the preparations for the coup in various ways. He was associated with the Kreisau Circle via his friend Yorck, advocating a political renewal of Germany on the basis of Christian and social principles like his friend. In Berlin, he made friends with Claus Schenk Graf von Stauffenberg in September 1943. Planned as the undersecretary of state to the designated head of state Ludwig Beck, he remained in the innermost circle of conspirators until the very end. On July 20, 1944, he waited for news of the assassination in the “Wolf’s Lair” in his office, along with Berthold Schenk Graf von Stauffenberg, Yorck, and Schulenburg. He was arrested in the Bendler Block late that evening, sentenced to death by the People’s Court on August 21, and murdered in Berlin-Plötzensee on September 8, 1944.