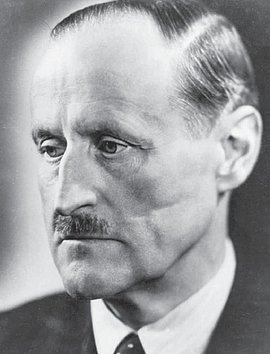 Attorney Ulrich von Hassell began his diplomatic career in 1909. After the First World War, he was transferred to the staffs of embassies in several European countries and headed the German embassy in Rome from 1932 on. He was married to Ilse von Tirpitz, with whom he had two daughters and two sons. He was a decisive critic of Hitler's foreign policy from the very beginning as he was convinced that it would lead to war. After the Blomberg-Fritsch crisis and the appointment of von Ribbentrop to replace Neurath as foreign minister, Hassell was removed from active service on February 17, 1938. After being forced into retirement, he repeatedly traveled to western countries representing the German opposition groups around Goerdeler and Beck in an effort to promote the goals of Hitler's opponents. Hassell supported a western orientation for Germany. In February 1940, Hassell met James Byrns, a confidant of British foreign minister Halifax, in Arosa. Ulrich von Hassell presented Byrns with a memorandum outlining the foreign policy aspirations of the groups close to him. The principles of a European postwar order were also communicated to the British government. Hassell also advised Carl Goerdeler, Ludwig Beck, and Johannes Popitz in formulating domestic policy plans for a coup. Following Hitler's assassination, Hassell was designated to assume a high-level position in the Foreign Office. On July 28, 1944, he was arrested by the Gestapo. After a two-day trial before the People's Court, Ulrich von Hassell was sentenced to death on September 8, 1944, and murdered the same day in Berlin-Plötzensee.