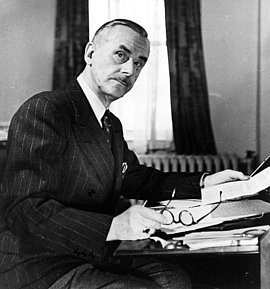 The internationally renowned writer Thomas Mann, awarded the Nobel Prize in 1929, was a prominent opponent of National Socialism long before Hitler took power. In reaction to Nazi election successes in October 1930, Thomas Mann warned of an impeding relapse into barbarism in his Berlin speech “An Appeal to Reason.” He was a target of extreme hostility from the political right wing from then on. In February 1933, he did not return to Germany from a lecture tour. Germany revoked his citizenship and that of his family in 1936. Mann initially lived in France, later in Switzerland, and continued his writing in exile. From 1937 to 1940 he published the cultural and literary exile journal Maß und Wert in Zurich, together with the Swiss writer Konrad Falke. Living in the United States from 1938 on, Mann helped numerous emigrants to escape the National Socialist terror, and made repeated personal interventions for improvements to the German refugees’ situation in the U.S.A. However, he strictly refused to join political exile organizations such as the Council for a Democratic Germany. Thomas Mann did not return to Europe until 1952. He lived in Switzerland until his death in August 1955.