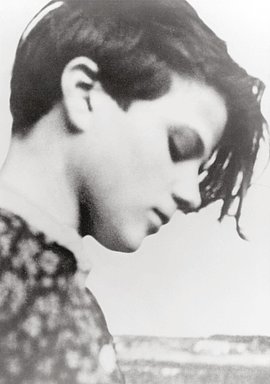 Born in Forchtenberg/Württemberg in 1921, Sophie Scholl joined the League of German Girls in the Hitler Youth in 1934, climbing to the rank of group leader. She was interrogated by the Gestapo while still at school in 1937, because of her brother Hans’s involvement in the "Bündische Jugend" youth movement. From this time on, she radically distanced herself from National Socialism. After finishing her schooling in March 1940, she trained as a kindergarten teacher and began studying biology and philosophy in Munich in May 1942, following labor and auxiliary war service. Through her brother Hans, she also came into contact with the Catholic journalist Carl Muth. Muth and the university professor Kurt Huber both had a profound influence on the two of them. In August and September 1942, Sophie Scholl had to do four weeks’ auxiliary war service in a munitions factory in Ulm. In January 1943 she was involved in the production and distribution of the fifth White Rose leaflet. Her friends had already duplicated the sixth leaflet, drafted by Kurt Huber, by the time she returned from Ulm to Munich on February 15, 1943. Sophie and Hans Scholl placed copies of this leaflet around the Munich University building on February 18, 1943, throwing some down into the atrium. They were arrested at the university, sentenced to death by the People’s Court under Roland Freisler on February 22, 1943, and murdered in Munich-Stadelheim Prison that same day.