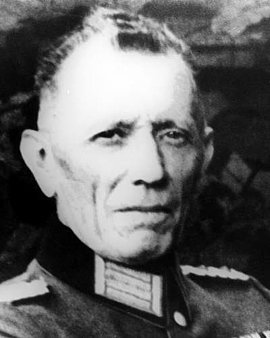 Colonel Siegfried Wagner, a former member of the “Stahlhelm” (Steel Helmet federation of combat veterans), was a resolute critic of Hitler’s wartime policy. Wagner, who had previously worked in the General Army Office, offered his services to the conspirators as chief of the Troops Department in the Armed Forces High Command. In the event of a successful coup, Wagner, who argued for the declaration of martial law, was designated as liaison officer to military district XI (Hanover). On July 22, 1944 Siegfried Wagner tries to commit suicide and died as a result of his wounds on July 26, 1944 in the Sachsenhausen concentration camp.