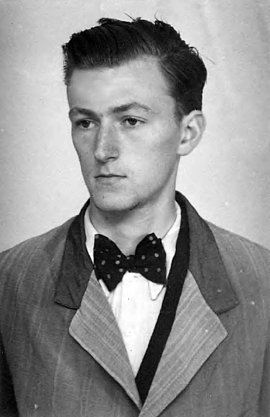 Samson Schönhaus, known as Cioma, grew up in Berlin-Mitte, where the family owned a mineral water company. The company was expropriated by the National Socialists in 1938. He was unable to complete his training as a graphic designer because he was made to perform forced labor. He was forced to work in arms and uniform production from 1942 on. His parents Fanja and Boris Schönhaus were deported in June 1942 and murdered, while Cioma’s deportation was deferred because of his work. He managed to make contact to opponents of the regime, first forging identity papers for a circle of Protestants from the Berlin-Dahlem Confessional Church, who supported victims of persecution. His drawing skills enabled him to produce very convincing forgeries. The adjusted documents helped other victims of persecution to survive while in hiding. In September 1942 Cioma Schönhaus went into hiding himself under a false identity. His workshop was a shop in Berlin-Moabit rented by third parties, shared with the Jewish printer Ludwig Lichtwitz and the Jewish electrician Werner Scharff, who were also living “illegally.” His fellow activists were denounced and arrested in the summer of 1943. Cioma Schönhaus fled Berlin at the end of September 1943 with a forged military ID and vacation certificate. He cycled to Württemberg and managed to escape to Switzerland in early October 1943. There, he completed his vocational training and studied German literature and psychology.