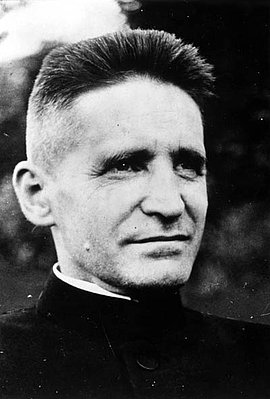 Born in Stuttgart, Rupert Mayer studied until 1899 in Fribourg, Switzerland, and in Munich, Tübingen, and the seminary in Rottenburg, where he was ordained. After being accepted into the Jesuit order, he served several years as a missionary in the Netherlands, Germany, Austria, and in Switzerland. In 1912 he came to Munich as a priest. While serving as an army chaplain in the First World War, he was severely wounded and one leg had to be amputated. Rupert Mayer critically examined National Socialism in Munich as early as the 1920s. The faithful in Munich valued him as a helper and as one dedicated to their spiritual welfare amidst the social misery of the big city. From 1935 on, the National Socialist authorities prohibited the Jesuit priest from speaking in public; he was repeatedly arrested for sermons criticizing the regime and was finally sentenced. After his release from the Sachsenhausen concentration camp in April 1940, the authorities attempted to silence Mayer. He was forced to refrain from preaching and was placed under house arrest. Mayer was forbidden to leave the Ettal monastery near Garmisch and only returned to Munich in May 1945. A few months later he died as a result of his incarceration.