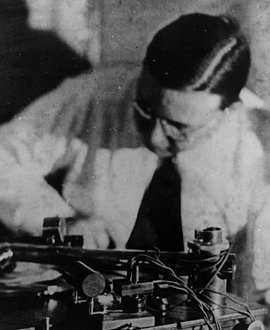 The radio pioneer Rudolf Formis built the first transmission station for the Süddeutscher Rundfunk radio station in Stuttgart in 1923, and spent ten years working there as a technician. He was a member of the SA and took part in the Nazis’ occupation and takeover of the Stuttgart radio station in March 1933. He came into conflict with the Nazi Party NSDAP shortly afterwards, partly because of his Jewish background. Formis left Germany and joined Otto Strasser’s Black Front in Prague in the spring of 1934. This grouping had originated in the social revolutionary wing of the NSDAP in the 1920s, and was in clear opposition to the Nazi party. Formis became the distribution manager of Otto Strasser’s magazine Die Deutsche Revolution. However, he mainly concentrated on setting up a secret transmitter for the Black Front southwest of Prague. From the fall of 1934, Formis broadcast oppositional information and commentaries into Reich territory every evening, angering the Nazi regime. Following unsuccessful demands for the Czech government to ban the illegal radio station, in January 1935 the SD head Reinhard Heydrich sent SS Scharführer (Staff Sergeant) Alfred Naujocks to destroy the transmitter and kidnap Formis. Formis was mortally wounded in an exchange of fire, and the killer managed to escape to Germany.