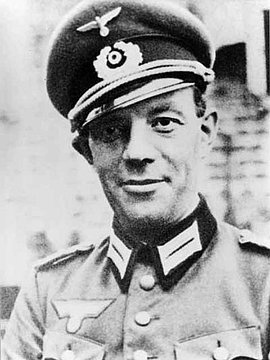 Gersdorff began his military career in 1923 in the 7th Cavalry Regiment and became a regimental adjutant in Breslau in 1933. Transferred to the War Academy in Berlin in the fall of 1938, he took part in the occupation of Sudetenland shortly after. Gersdorff’s unit was deployed in the German Wehrmacht’s invasion of Poland, and he was subsequently in action as a general staff officer in the western offensive against France. From 1941 on he was a counterintelligence officer on the staff of Army Group Center and belonged to the close circle of conspirators around Henning von Tresckow. Gersdorff felt deep revulsion at the National Socialist crimes of violence, particularly the “Kommissarbefehl” (Hitler’s “Commissar Order” to murder the Red Army political commissars among Soviet prisoners of war). In March 1943 the official celebration of Heroes Memorial Day in Berlin provided the chance to prepare a bomb attack to kill the dictator. The conspirators chose the Zeughaus (Arsenal) in Berlin as the scene of the assassination attempt. Hitler planned to visit an exhibition of captured weapons there as part of the ceremonial program. Commissioned by Tresckow, Gersdorff had already begun obtaining explosives from the summer of 1942 on and testing whether they could be used for an assassination attempt. He volunteered to attempt to kill Hitler. The plan was that on March 21, 1943, Gersdorff, as an expert, should explain individual exhibits to Hitler in the Zeughaus. While Hitler was touring the exhibition rooms, Gersdorff kept close to him constantly with two bombs in his coat pockets. But unlike in previous years, on this occasion Hitler left the exhibition after only a short tour. Hitler’s unexpectedly brief visit made it impossible for Gersdorff to carry out the assassination attempt. After the failure of this attempt, Gersdorff remained active in the military opposition, yet the Gestapo never discovered his involvement.