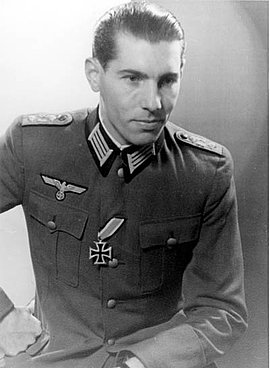 Married to Hermine Feichtinger, with whom he had two children, Robert Bernardis was regarded as a staunch National Socialist during his training as a career military officer in the Austrian army and at the War Academy in Berlin. After seeing action in Poland, France, and the Soviet Union, he was promoted to major in 1942 and transferred to the Allgemeines Heeresamt (General Army Office) of the Army High Command in Berlin, where he headed a department. In the winter of 1943 as a lieutenant colonel of the General Staff, his duties brought him into contact with Claus Schenk Graf von Stauffenberg. In the spring of 1944, he was included in the plans for a military coup. Bernardis prepared the coup in military district XVII (Vienna). On July 20, 1944, he was with Stauffenberg as a member of the staff of the General Army Office where he was responsible for relaying the "Valkyrie" orders. Bernardis was arrested that same evening. On August 8, 1944, the People's Court under Roland Freisler sentenced him to death, and he was murdered the same day in Berlin-Plötzensee.