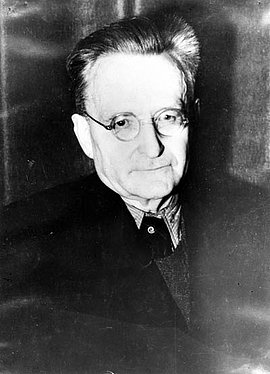 Paul Löbe was a member of the Social Democratic Party long before the First World War, working for his party as an editor and city councillor. In 1919, he became vice president of the national assembly, the body entrusted with drafting Germany's constitution. In 1920, he was elected president of the Reichstag, an office he held until 1932. He was married to Clara Schaller, with whom he had a son. After Hitler's rise to power, Löbe was arrested and brutally abused in the Breslau-Dürrgoy concentration camp in Silesia. After his release, he lived in Berlin and kept a low profile. Wilhelm Leuschner and Julius Leber brought him into contact with the resistance group around Carl Goerdeler. The conspirators planned to make him future president of the Reichstag after Hitler was overthrown. The Gestapo remained unaware of these plans. However, after July 20, 1944, Paul Löbe was arrested and held for several weeks in the Gross-Rosen concentration camp in Silesia as part of Aktion Gewitter (Operation Thunderstorm). He survived the end of the war and after 1945 was president by seniority of the West German federal parliament.