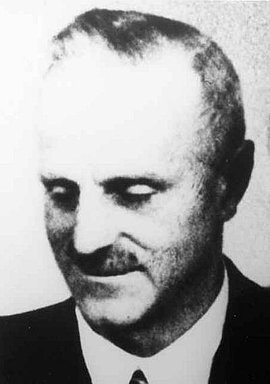 Paul Gerhard Braune studied theology and became a pastor, like his father. In 1922 he became director of the Hoffnungstaler Anstalten (Hoffnungstal Clinics and Homes) in Lobetal near Berlin, and was elected as the local mayor. A worker in the Innere Mission (Domestic Mission), Braune joined the Confessional Church and was interrogated by Gestapo officials for the first time in 1933. He collaborated with the “Church Aid Office for Protestant Non-Aryans” (Pastor Grüber’s Office) in Berlin, and appealed to the Reich Chancellery in 1938 with a “Memorandum on the situation of non-Aryan Christians”. In 1940 Braune protested strongly against the mass murder of patients in psychiatric clinics and homes. In a memorandum addressed to Hitler he adduced considerable evidence of the systematic nature of these murders. Braune refused to hand over patients entrusted to his care at the Hoffnungstaler Anstalten. He also supported deserters and victims of racial or political persecution. Braune was imprisoned by the Gestapo in the summer of 1940. During his imprisonment, leading Church representatives protested for the first time against the murder of invalids and the mentally ill, which had become more widely known by then. Pastors from the Confessional Church mentioned Paul Gerhard Braune in their prayers. Braune was unexpectedly released from prison after three months and survived the war.