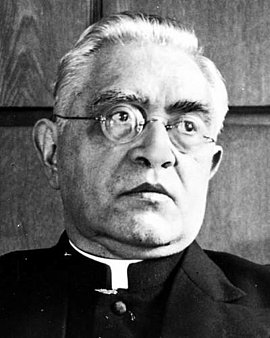 Otto Müller was ordained as a priest in 1894 and actively supported the development of a Christian workers’ movement. In 1918 he became president of the West German Federation of the Catholic Workers’ Movement and was a Center Party delegate on the municipal councils in Mönchengladbach and Cologne from 1919 to 1933. Müller was convinced at first that the Concordat between the Reich and the Vatican provided a secure basis for the Catholic Church’s activities, but soon started opposing the bishops’ policy of submission. He demanded that the Catholic Church take a clear position against the legal violations of the National Socialist state. Müller was already in contact with the military opposition circles before the beginning of the Second World War, and later let individual opponents of the regime use the Ketteler-Haus in Cologne for discussions. He was involved in planning the reorganization of Germany with Jakob Kaiser, Nikolaus Groß and Bernhard Letterhaus. After the failure of the assassination attempt of July 20, 1944, the Gestapo arrested the Cologne conspirators. Seriously ill, Otto Müller was imprisoned in the Berlin Police Hospital, where he died.