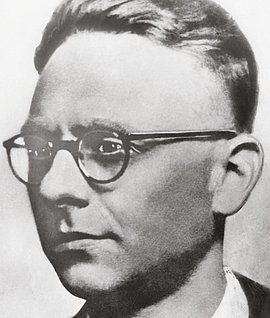 The son of a teacher, Weise joined the Communist Youth Federation of Germany in 1921 and the KPD in 1927. He studied history and literature from 1922 to 1924 but had to abandon his studies for financial reasons. Before becoming unemployed in 1928, he spent several years working for an insurance company. In 1929 Weise became a local representative for the KPD in Berlin-Neukölln. He began writing articles for the party’s Rote Fahne newspaper in 1930 and was one of the editors who continued to publish it illegally after 1933. He was arrested in 1934, sentenced to three years in a penal institution, and transferred on his release to Sachsenhausen concentration camp, where he was reunited with Wilhelm Guddorf. Weise’s partner Frieda Seydlitz worked as a courier and was murdered in remand prison by the Gestapo in 1936. After his release from concentration camp, Weise made contact to his old friends, including Guddorf. They got in touch with Bernhard Bästlein and Robert Abshagen in Hamburg and helped produce the leaflet “Organize the Revolutionary Mass Struggle,” which circulated in various illegal Berlin groups in early 1942. Martin Weise was arrested on December 1, 1942, sentenced to death by the “People’s Court” on October 8, 1943, and murdered in Berlin-Plötzensee prison.