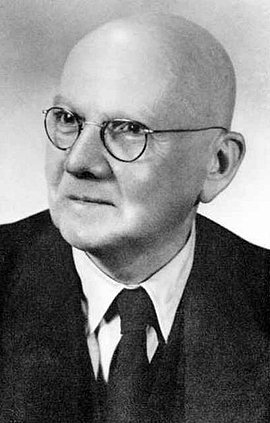 Born in Halle/Saale, Martin Albertz studied theology and entered a pastorate in Stampen near Breslau in 1910. A member of the Reformed Church, in 1931 he became superintendent in the Berlin district of Spandau. In the struggle within the Church he fiercely opposed the National Socialist “German Christians”, and was a member of the circle that established the Pastors’ Emergency Council in 1933. In 1934 Albertz assumed responsibility for establishing and directing the Theological Examination Office of the Confessional Church of Berlin-Brandenburg. He also taught at the Protestant University, which was regarded as illegal from 1937 on. In 1936, as a member of the Second Provisional Church Directorate, he was co-author of a memorandum to Hitler that included condemnation of state intervention in Church life and the persecution of Jews and political opponents. In 1938 Albertz was co-publisher of a prayer liturgy that confronted the German people with their shared responsibility for the impending war, and called for atonement. As a result of a disciplinary procedure initiated in 1938, Albertz was removed from his post in 1940. Since he continued teaching, holding examinations for the Confessional Church and helping persecuted people, the Gestapo arrested him in May 1941. The Berlin Special Court sentenced him to 18 months’ imprisonment in December 1941. Martin Albertz was imprisoned again in June 1944 for working as a pastor and for “demoralizing the troops”. However, he survived the war.