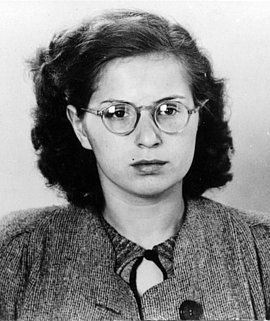 Marianne Prager was the daughter of a construction worker and grew up in Berlin. After completing her schooling she became a nurse at the Jewish children’s home on Gipsstraße in Berlin-Mitte. She had to give up this job when she was sent to Rathenow for a forced labor placement in agriculture in the summer of 1940. She married Heinz Joachim in Berlin on August 22, 1941, while working as a forced laborer in the Alfred Teves factory in Berlin-Wittenau. After her husband met Herbert Baum in the “Jewish department” of the Siemens electric motor factory, the couple and their friends joined the Baum group. They often used their apartment on Rykestraße in Prenzlauer Berg as a meeting place. Two months after her husband’s arrest, Marianne Joachim was also arrested for her involvement in the arson attack on the “Soviet Paradise” exhibition on June 9, 1942. She and eight other members of the Baum group were murdered in Berlin-Plötzensee on March 4, 1943.