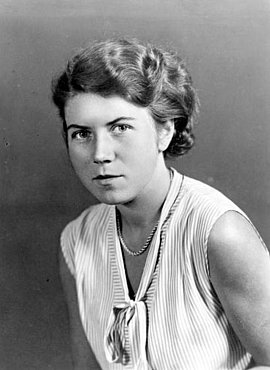 Maria Terwiel was born on June 7, 1910 in Boppard am Rhein. She attended high school in Stettin, where her father worked as deputy commissioner in the office of the regional commissioner of the province of Pomerania. After obtaining her school-leaving certificate in 1931, Maria Terwiel studied law in Freiburg and Munich. In Freiburg she met her future fiancé, Helmut Himpel. Since she was “half-Jewish”, she had no prospect of the trainee civil service post required for a law qualification. She broke off her studies and returned to her family, who had moved to Berlin. She earned her living as a secretary in a French-Swiss textile firm. Maria Terwiel and Helmut Himpel supported Jewish people by obtaining food ration cards and identity papers for them. The couple met Harro Schulze-Boysen and John Graudenz and took part in the actions of the resistance group around Schulze-Boysen. Maria Terwiel duplicated several leaflets on her typewriter, including the “AGIS” leaflet, “The People are Troubled about Germany’s Future!” in January 1942. She also participated with Fritz Thiel in the flyposting action on May 17-18, 1942 against the National Socialist propaganda exhibition “The Soviet Paradise”. At the beginning of September 1942, Fritz Thiel handed over a radio transmitter to her. Maria Terwiel was arrested on September 17, 1942, sentenced to death by the Reich Court Martial on January 26, 1943 and murdered in Berlin-Plötzensee on August 5, 1943.