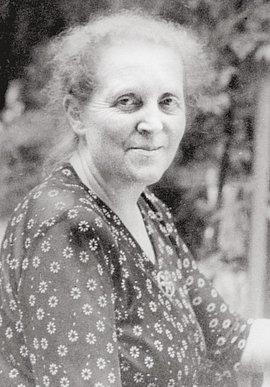 Margarethe Grobbecker grew up in a Protestant parsonage. After attending a school for women teachers, she began working as a tutor. She joined the German National People’s Party (DNVP) after World War I. The Kapp Putsch and the murder of foreign minister Walther Rathenau prompted her to leave the party, however. In 1921 she married the jurist and firm republican Hans Lachmund. The two of them were actively involved in the German Peace Society and joined the SPD. Encountering the Quakers at a 1924 peace congress in London became a life-changing experience for Margarethe Lachmund. She worked in the German section, founded in 1925, and joined the organization formally in 1933. The Lachmunds were resolute opponents of the Nazi regime and were in contact with the resistance circle formed around the liberal democrats Ernst Strassmann and Hans Robinsohn from 1934 on. Hans Lachmund was dismissed from the judicial service in 1933 and later transferred to the district court in Anklam, where they lived until 1940. When the situation in Germany became more and more dangerous for Jews after the 1938 pogrom, Margarethe Lachmund began working for the “Church Aid Office for Protestant Non-Aryans” in Pomerania, helping victims of persecution to emigrate in close cooperation with the Quakers’ International Secretariat. When some 1,200 Jews were deported from Western Pomerania to the Lublin district in February 1940, she organized a wide range of help. Margarethe Lachmund continued to work for the Quakers after the war, running their office in West Berlin from 1948.