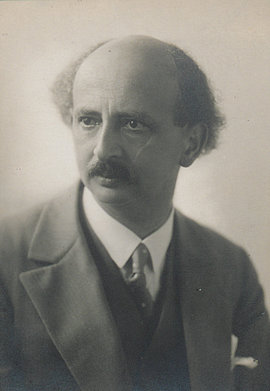 The jurist Ludwig Marum joined the Baden branch of the SPD in 1904 and set up a law firm in Karlsruhe. He obtained his first political office in 1911 as a member of the citizens' committee, remaining a town councilor in Karlsruhe until 1921; he was elected into the Baden state parliament in 1914. As justice minister for the provisional state government after the 1918 November revolution, as a member of the constitutional assembly of Baden, chair of the SPD parliamentary group in the Republic of Baden (1919-1928), and a member of the German Reichstag (1928-1933), he worked to expand the democratic rule of law and to instigate fundamental social reforms. He was in favor of abolishing the death penalty, equal pay for men and women, and extending rights to illegitimate children, and against the discrimination of unmarried mothers. Subjected to repeated anti-Semitic attacks by his political opponents due to his Jewish origins, Marum was one of the key defendants of the Weimar Republic's young democracy. He took a clear stand against the burgeoning National Socialist movement and launched a public attack on Hitler's policies during the Reichstag election campaign of 1933. He was put into "protective custody" as early as March 10, 1933, and taken to the newly built Kislau concentration camp near Bruchsal on a demeaning public "show transport" on May 16, along with six other Social Democrats from Baden. He was murdered in the camp on March 29, 1934.