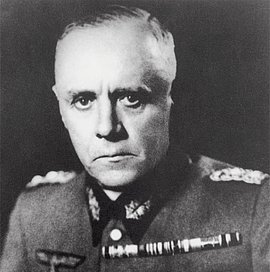 Ludwig Beck joined the Prussian army in March 1898 as a cadet and continued his military career in the Reichswehr after the First World War. In October 1933 he became head of the Truppenamt in the defense ministry and in 1935 was promoted to Chief of Army General Staff. Until 1938 Beck attempted to influence Hitler's foreign policy with papers, memoranda, and presentations. In the summer of 1938 Beck unsuccessfully called upon the senior generals to resign simultaneously to prevent the impending war in Europe. He stepped down from office for reasons of conscience shortly afterward and became a central figure in the military and civilian opposition. Uncompromisingly rejecting the risk of war, Beck met with Carl Friedrich Goerdeler and other individuals who strived for a new political order in Germany. Their most important goals were reinstatement of the rule of law and quick termination of the war. Beck participated in planning the assassination attempt and was designated to become head of state following Hitler's death. Late in the evening of the failed coup on July 20, 1944, Ludwig Beck attempted suicide. When this attempt failed, the severely injured Beck was shot dead on the command of Colonel General Friedrich Fromm.