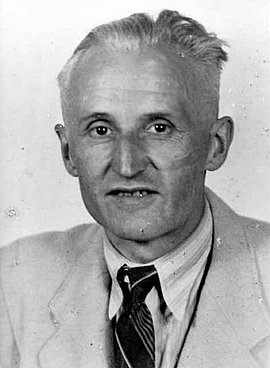 Born in Flöha (Saxony), Lothar Kreyssig studied law. After gaining his doctorate in 1923 he worked initially as an attorney in Chemnitz, later as a judge at Chemnitz Regional Court. An early supporter of the Confessional Church, he became one of its foremost representatives and led the first Confessional Synod in Saxony in October 1935. His active involvement in church policy brought him into continual conflict with the National Socialist regime. In 1937 he was transferred to Brandenburg, where he participated in developing Confessional parishes. In April 1939 disciplinary proceedings were initiated against him, but then suspended because he was drafted to the Wehrmacht. In 1940 Kreyssig became aware of the systematic murder of patients in psychiatric clinics and homes through his work as a judge dealing with guardianship matters. He steadfastly refused to acknowledge the legality of these murders. He instructed the directors of clinics and homes in his area of jurisdiction not to hand over patients, and laid murder charges against Reich Leader Philipp Bouhler. Kreyssig stood alone among the judges and public prosecutors in demonstrating resistance. He was sent into retirement in the summer of 1942. Lothar Kreyssig survived the war and became a co-founder of “Aktion Sühnezeichen - Friedensdienste” (Action Reconciliation Service for Peace) in 1958.