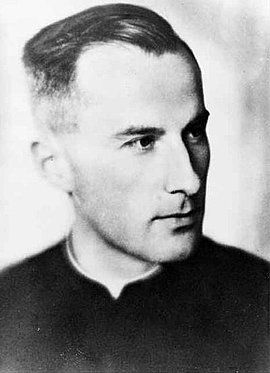 In 1919, at the age of 13, Lothar König, the son of a Stuttgart merchant, joined Neudeutschland (New Germany), a Catholic group in the Youth Movement. He became a novice in the Jesuit Order and studied scholastic philosophy from 1926 to 1929, followed by natural sciences in Munich. After he was consecrated as a priest in 1939, Augustin Rösch, the Jesuit Provincial, appointed him as his authorized representative for the Berchmanskolleg in Pullach, an important training school for German Jesuits. König was later appointed professor of cosmology at the Berchmanskolleg. He became an important courier and intermediary in defending Catholic Church institutions and their Orders against encroachment by the National Socialists. From 1942 on König was also actively involved in the discussions of the Kreisau Circle. König endeavored to inform the bishops of Freiburg and Berlin about the goals of the Circle and had constant discussions with Peter Graf Yorck von Wartenburg, one of its leading members. After the unsuccessful coup attempt of July 20, 1944, König heard that Yorck von Wartenburg had been arrested in connection with the attempt to assassinate Hitler. At the end of September 1944, the Criminal Investigation Police issued a warrant for König’s arrest. After the Gestapo caught Augustin Rösch, König sought refuge in the coal cellar of the Berchmanskolleg, where he had to live in hiding until his liberation on May 1, 1945. Lothar König died shortly afterward from the effects of an illness that could not be properly treated while he was in hiding.