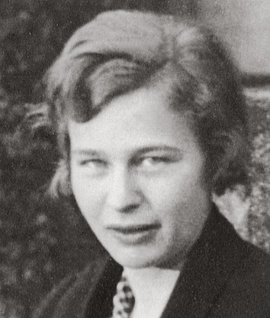 Libertas Haas-Heye spent her childhood on the estate of her grandfather, Philipp Fürst zu Eulenburg und Hertefeld, in Liebenberg near Berlin. After obtaining her school-leaving certificate at a girls’ high school in Zurich, she spent some time in England. In 1933 she began working as a press officer for Metro-Goldwyn-Mayer in Berlin. She met Harro Schulze-Boysen in the summer of 1934 and married him in Liebenberg in the summer of 1936. At the beginning of 1937 Libertas Schulze-Boysen left the National Socialist Party (NSDAP), which she had joined in March 1933. She collaborated with Günther Weisenborn on a theater play, “Die guten Feinde” (“The Good Enemies”). In 1940 she wrote film reviews for the newspaper “Essener Nationalzeitung”. At the same time she collected photographs documenting National Socialist crimes of violence in the German cultural film center in the Reich Propaganda Ministry. She helped her husband in the search for new contacts in the resistance. At the end of 1941 she was visited by the Soviet military intelligence officer who had arrived in Berlin from Brussels, and arranged for him to have a discussion with her husband. After Harro Schulze-Boysen’s arrest she warned friends and disposed of illegal material. Libertas Schulze-Boysen was arrested on September 8, 1942, sentenced to death by the Reich Court Martial on December 19, 1942 and murdered three days later in Berlin-Plötzensee.