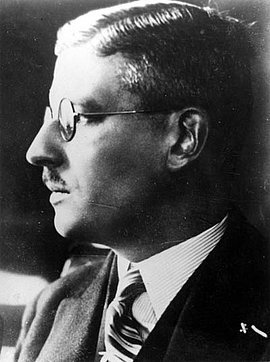 The Austrian politician Kurt Schuschnigg held various ministerial posts from 1932 on, and became Engelbert Dollfuß's successor as Austrian chancellor after the latter's murder on July 25, 1934. Like Dollfuß, he was an authoritarian ruler—his predecessor had already removed power from the parliament and constitutional court and banned political parties. Schuschnigg established an Austrofascist regime, arresting thousands of his political opponents. Although Schuschnigg attempted to maintain Austria's independence he was unable to stand up to strong pressure from Hitler and stood down on March 11, 1938, one day before German troops invaded the country.
Upon Austria's "Anschluss," Kurt Schuschnigg, who was married with one daughter, was imprisoned until his liberation at the end of the war. The July 20 conspirators' plans for government included Kurt Schuschnigg as minister of culture, although he did not learn of this fact in prison.