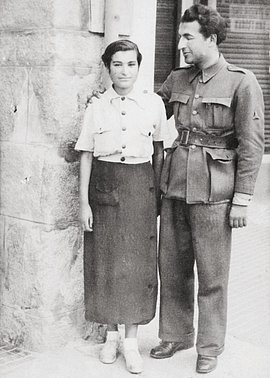 Kurt Julius Goldstein (shown here in 1938 with the republican nurse Anita Gómez-Ibáñez in the Catalonian town of Santa Coloma de Farners) joined the KPD in 1930 and had to emigrate from Germany at the end of February 1933. He joined the International Brigades in November of 1936. He fought on the front near Brunete in July 1937 and in the Battle of Teruel in December of that year, and was wounded shortly afterward. He later became a political commissar in the Santa Coloma de Farners military hospital. After the International Brigades were disbanded in 1938, Goldstein fled to France and was imprisoned in several internment camps there. He was extradited to Germany in July of 1942 and deported to Auschwitz-Birkenau extermination camp. Kurt Goldstein lived to see the end of the war in Buchenwald concentration camp in April 1945.