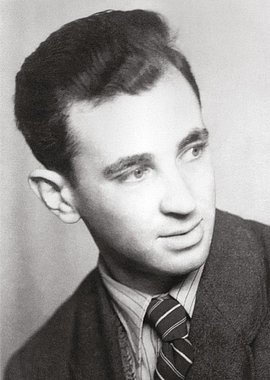 The budding musician Konrad Latte from Breslau took organ lessons as long as was possible as a Jew. His family did not manage to emigrate and Konrad Latte had to perform forced labor in Breslau. The family went into hiding at the end of February 1943. Having stayed with an acquaintance for several days, they risked a train ride to Berlin. They were able to stay with the actress Ursula Meißner in Berlin-Prenzlauer Berg for some weeks until neighbors asked her about the “Jewish appearance” of her allegedly bombed-out friends. The family had to split up. Konrad Latte managed to earn money as an organist at the Wedding crematorium. At the beginning of October 1943, he and his parents were arrested during a raid and taken to the collection point on Große Hamburger Straße. Margarete and Manfred Latte were quickly deported to Auschwitz and murdered. Konrad Latte escaped from the collection point on November 23, 1943. The Berlin prison chaplain Harald Poelchau, who had been supporting the family for some time, gave him forged papers. From the spring of 1944, Latte took over the musical direction of the Hessisches Volkstheater under the assumed name of Bauer. In this role, he met the soprano singer Ellen Brockmann and fell in love. When all theaters were closed in September 1944, she found a place for Konrad Latte to stay in her hometown of Homburg, saying he was her fiancé. The couple married at the end of April 1945, had a daughter, and returned to Berlin.